You gently place the crosshairs in the exact spot your dad taught you to all those years ago. The adrenaline is building. This is it—the moment you have dreamed about. The excitement starts getting too much to handle. You take a deep breath in, let it out, and ever so slightly start the slow squeeze of the trigger. And then your alarm goes off.

We have all been there. Dreaming of that perfect buck—you know, the one with a massive body and unique rack. The buck you have one good trail camera picture of that still gets you excited even weeks and years later. The buck that always shows up after the season ends, taunting you at a safe distance. The buck that dreams are made of.

I had a buck like that a few years ago. My husband and I had found a new area after stumbling on a six-point mule deer shed during shed season. So, we set up a couple of cameras and let them go for the summer. That was the year we first laid eyes on “Dream Buck.” He was a super-wide 3×4. I could tell that he was still young but had some major potential. A few other hunters had mentioned this big 3×4, and he was chased hard that year, but no one harvested him. We never saw him again that year, and he made only the one appearance on the game camera. 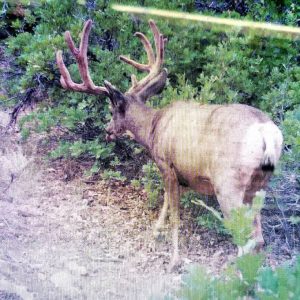 The next spring finally rolled around, and all we could talk about was that the snow needed to melt so we could get some cameras up to see if Dream Buck lived. We had the cameras up for months with no activity from him. Plenty of his friends stopped by, but he never did—until late August, when he came walking through. He didn’t stop. He just kept walking. He never showed his face again that season. That year, during the rifle hunt, I ended up harvesting one of his friends that was still in velvet. Dream Buck never made an appearance again until the snowflakes started to fall. He stopped by on his way back from water, but he didn’t stick around long enough for us to get a good look at him. All we could tell was that he had put on some more mass and had packed on the pounds. He was becoming the ultimate dream.

It seemed that winter lasted forever that year. We were eager to get out and look for Dream Buck’s sheds and try to pinpoint where he was hanging out. When the snow melted enough, we set out on a mission to set more cameras and to get more familiar with the area. We searched and searched but never did turn up his sheds. However, we did get him on camera more frequently in the canyon where we had set up a camera. He was making weekly appearances, multiple times during the day. He was definitely our ultimate dream that third year. His body was massive, and his antlers had packed on even more mass. He was a 4×5 with a hook cheater on his right side. His antlers were a darker brown, and he just had that look we all dream about. He was gorgeous.

Then along comes the rifle hunt, and my grandpa is the only one with a tag. Now my grandpa always told me that a deer had to be big enough to win a Jeep for him to shoot. He had seen the pictures of Dream Buck and had mentioned that if he showed his face, he would gladly shoot him. Hope was lost, though, as we had not had a sighting of Dream Buck since early September. Opening morning was a fun one. We saw plenty of deer, but nothing big enough to win a Jeep.

The second morning of the hunt rolled in, and still nothing big enough to win a Jeep. It was about mid-morning, and we were discussing heading back to camp for breakfast when my husband suggested we check the canyon where we had seen Dream Buck before. We pulled up and started glassing. My husband and my grandpa spotted two spikes and just sat there, waiting for me to finish glassing. In between the two spikes was a clump of oak brush, and nestled in that clump of oak brush was a larger buck. A buck with some mass and a big body to go with it. I kept looking to make sure my eyes weren’t deceiving me. At this point, I am sure this deer is for real, so I tell my grandpa to grab his gun. I remember him saying, “I’m not shooting a spike!” 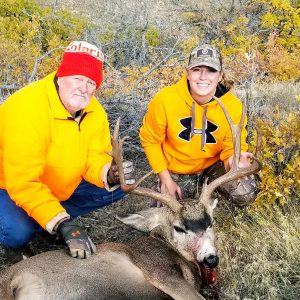 It took some explaining to them both to get them to see this buck, and they still couldn’t see him—until he stood up. I have never seen my grandpa grab his gun faster than he did that morning. He took a deep breath—I could tell he was excited. You could feel the adrenaline and tension building among all three of us. This was it—the moment we had all dreamed about: a buck worthy enough to win a Jeep. I watched the slow squeeze of the trigger, and then the sound of a rifle shot rang out.

The smell of gunpowder in the air was followed by the telltale sign of a hit, the “whap.” My grandpa had just harvested a true Jeep-winning trophy, but was it “the one”? After we knew he was down for good, I decided to cut through the canyon to see what deer it was. At this point, we weren’t sure, because the oak brush camouflaged the antlers a bit. My husband and my grandpa took the four-wheelers around to the other side.

I walked slowly, wanting my grandpa to get the first closeup look at the deer. Each step I took, the view just kept getting better and better. My smile grew bigger and bigger as well. I knew who this buck was. The hook cheater didn’t lie. I stood there, maybe 20 yards away, waiting for my husband and my grandpa to lay eyes on him. A three-year quest had ended that day. Dream Buck finally became a reality, and I am blessed beyond belief that I got to live the dream.