Got a Hunter Tracker Story? Lets us know and we’ll add it here! 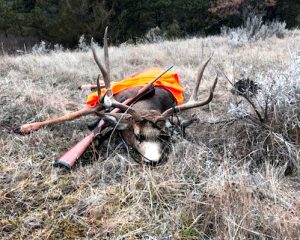 It was an early November Montana mule deer hunt at the start of the rut near the Missouri Breaks. The temperature was hovering around 13 degrees and dropping toward an overnight low prediction of -10. The sun was getting low.

We had been glassing a basin below a confluence of drainage’s in hopes of spotting a buck or two heading for the evening feed on the canyon rim when we finally spotted a couple does breaking out into an open patch heading up the far side. Counted 6 does in all, then a nice mature 4×4 buck showed himself and started following the girls. Into and out of patches of trees they went.

About mid way up the hill he stopped in an open patch; ranged him at just under 560 yards. My partner was laid out with a good prone shot quartering away. With a 40″ holdover his 7 mag boomed. The buck humped, jumped, staggered 10 yards, and fell over dead.

After a 45 minute trek to reach him, we had a light snow starting. Took care of the cleaning chores just at sunset and decided we would pack him out in the morning. We used our new Hunter Tracker app to mark the position. Turned on head lamps, and headed back to the side by side marking several waypoints along the return path.

Next morning we woke to 4″ of new snow on the ground, but we easily followed the waypoints back to the buck. We may have been able to make the recovery on our own, but with the aid of the Hunter Tracker app it was a piece of cake. I never would have guessed the app was this good; I’M SOLD! Thanks guys for a great product at a super price.