I recently had the opportunity to test out the Grizzly Coolers 60 quart cooler. 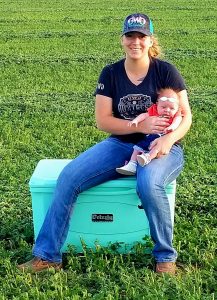 What first drew me to the cooler was the color: sea-foam green. They come in many colors, but this one was so vibrant and perfect for everyone, male and female alike! Both the handles and the two latches that hold the cooler closed are sturdy  and extremely durable. I am always afraid they will get too stretched out, but these have just enough stretch not to worry.

The inside comes with a handy plastic shelf which is great for my favorite snack, string cheese!

The inside of the cooler looks like any other cooler until you add ice.

When I gave it a go against the YETI Cooler 60 quart I already had, I made sure they were the same internal temperature and put the same amount of ice in. I added a 12 pack of Pepsi into each cooler and let it sit until that night.

When I came back, both had cold drinks inside and both had some melted ice. It wasn’t until a few days later that I noticed a difference. The water was still super cold in both, but the ice in the YETI was completely melted while there was still ice floating in the Grizzly!

Both coolers are great and I will continue to use them both, but in the end the Grizzly kept ice one day longer than my YETI. I will take that as a win!

The verdict? I absolutely loved the outcome and would recommend either cooler but one extra day of ice can make or break a hunt! Be sure to check out Grizzly Coolers. They’re available online at Amazon. You won’t be disappointed! Get the latest prices on all the best coolers here.